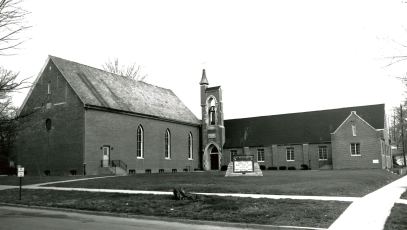 According to tradition, the United Brethren Church  held their first service in Richard Helvey's barn in 1844. Helvey was the first settler in Chester Township. This barn was located three-fourths mile north-east of Manchester University. Later he built a big barn at 205 East Second Street where services were then held.

The United Brethren had no church facility until 1854. They held revival services in the Lutheran Church prior to this. Mahlon Frame, seeing the great need of a church, donated the lot on 306 East Second Street where now stands the United Methodist Church. There they built a frame church, which served the congregation for thirty-one years. They heated the church with two stoves and lighted it with candles.

In 1885 they sold the church facility to Progressives, now First Brethren, and moved it to 407 North Sycamore and Fifth Street. They built a brick church where the frame church had been located. There were ten art glass windows in that church, now used in the new sanctuary. The parsonage, beside the church, was sold and moved to South Sycamore.

In 1911 the parsonage at 305 E. Third was purchased. They remodeled the church in 1914, when a basement, kitchen, toilets, and furnace were added.

The Evangelical and United Brethren denominations merged in 1946 and the name was changed to Evangelical United Brethren Church. In 1954 they remodel the church. They reversed the auditorium to face south. A pastor's study, nursery, kitchen, parish hall, two classrooms, stage, four toilets, six class rooms in basement and an oil furnace were added. An electric organ was installed. They burned the mortgage burning on April 17, 1966. 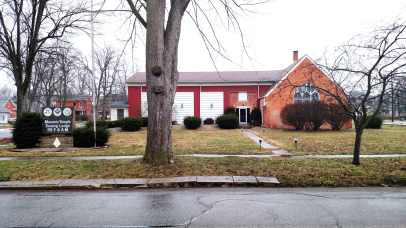 At the conference of the Methodist Episcopal Church in 1840, what was known as Rochester Mission was formed, beginning at a point west of Rochester and extending east of Columbia City, taking in a territory about sixty miles long and from ten to twenty miles wide. In 1841 Liberty Mills and North Manchester became regular preaching appointments.

In the spring of 1845 the church building and parsonage were completed. The church stood on the comer of Second and Front Streets.

Three parsonages stood on the same site beside the church: the first, a log house; the second a frame house, which later gave place to a more modem structure that many years later became Wesley Hall housing church offices and additional Sunday School rooms.

In 1873 they built a new church building, and dedicated in on August 16, 1874. They later remodeled the facility in 1884-85. What was later known as the Fellowship Hall was built to the north of the church for Sunday School purposes.

In 1923 they added another addition to the east, which included more Sunday School rooms, a kitchen, and a chapel.

Plans were discussed to add to the north of the present building, to the east, but after exhaustive investigations the building committee decided to recommend re-location. The congregation voted to relocate in November of 1958. In September of 1959, the Board of Trustees purchased several lots in the Fairview Addition.

In June of 1963, they completed the new parsonage erected at the corner of Walnut and College Avenue. The parsonage was dedicated on October 20 of that year with an open house.

In July of 1964, following the recommendations of the Building Committee and approval of a special Quarterly Conference, the Trustees purchased the Stucker property, thus giving the church a complete city block, bounded by College Avenue on the south, Walnut Street on the east, Kosher A venue on the north and Market Street on the west.

We held an auction sale in April, 1969, disposing of materials of the two churches not being used. We sold the Methodist Church building in July of 1970. The front part of the facility was torn down. In 1978 the building became the New Masonic Lodge.

On April 21, 1974, after a six years study, we voted to build on and remodel the United Methodist Church building on East Second Street. We built a new sanctuary and converted the old. The cornerstone was placed September 7, 1975. Consecration Day fell on March 21, 1976.

The Third Street parsonage and garage were removed in the spring of 1984, when the Kenneth Burr house just north of the church was torn down. The Burr property provided space for the play equipment for the Sycamore Nursery School. The Sycamore Preschool had been established in 1975. 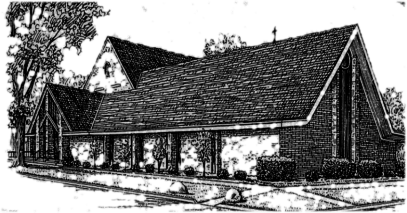 In 1883 we installed a hand crafted Zimmer Pipe Organ, just in time for Christmas. Dedication of the new organ was held in February, 1984. We dedicated the new sanctuary on March 16, 1986.

The Manifold property just north of the church was purchased in 1994. In 2002 we named the the Sycamore Street property, "Manifold House," and designated it for youth and young adult programming. On May 18, 2003, the Manifold House and courtyard were dedicated.

A Church Conference was held on August 20, 2003 to decide on purchase of property immediately across Second Street from the church (old United Technologies property). The church voted to purchase the property and to use as a parking lot. We closed on the property on  November 25, 2003.

On March 30, 2014, North Manchester UMC voted to approve a mortgage to cover the costs of a new addition. The new addition includes a much larger kitchen, a renovated fellowship hall, a drive through canopy, a welcome area, a vertical lift and a handicap accessable restroom. We dedicated the addition on April 3, 2016.

Making disciples of Jesus Christ for the transformation of the world.

Spread the word and raise awareness about what we do. The best way to do it is through social networking!